Where are you going to be on Monday, August 21, 2017? If the answer is not in the US, you might want to revise your plans. Because next year, for the first time since 1979, a total solar eclipse is going to pass over the contiguous US (the last non-contiguous eclipse was in Hawaii in 1991). The path of totality, where the moon will completely skewed his son, will sweep across the US from the Northwest to the southeast. 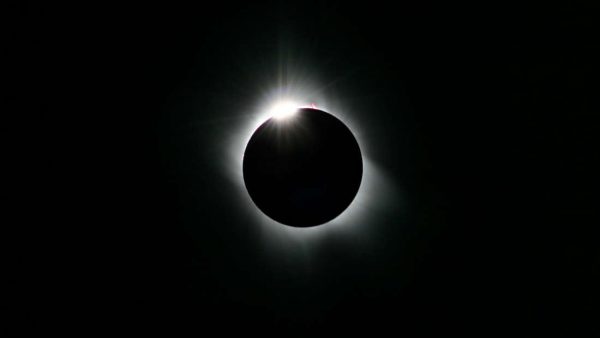 If you’ve never seen a total solar eclipse before, this will be an event not to be missed. Although partial eclipses are more regular, there just isn’t a comparison for the several minutes of darkness during totality. As Sky & Telescope notes, “The sky turns dark (like a very deep twilight) and the brightest planets and stars become visible. Animals become quiet, birds go to roost, and the temperature drops noticeably.”

A total eclipses caused by the mathematical oddity in which the sun’s disk is 400 times greater than the moons, but the moon is 400 times closer to earth. With the moon in orbit around the earth, there are times when it passes directly in front of the sun from our point of view. There are actually two total solar eclipses every three years on average, and many more partial eclipses (when the moon covers only part of the sun’s surface). But the shadow caused by totality is relatively small, so seeing it from a particular location is rare.

This time next year, for the first time since 1918, the moon’s shadow will cross from the Pacific West Coast of the US to the Atlantic East Coast. It will pass through 14 states during the course of August 21, including Oregon, Kansas, Illinois, and North Carolina. It will take the moon more than three hours to cross the sun, but the actual period of totality is much smaller – about two minutes, depending on where you are. Universe Today notes that the best viewing locations are likely to be in the Western US, which is less prone to afternoon summer thunderstorms than the southeast.

There are already reports that many hotels are filling up with eager eclipse watchers, so if you’re planning to stake out a position ahead of the event, you might want to do it sooner rather than later. The next total solar eclipse in the US will be in 2024, and after that, it’s 2045. This might be the experience of a lifetime you don’t want to miss!