One of the most amazing discoveries as of late is that NASA has just declared earth appearing to have a second moon that has been orbiting around our big blue sphere for nearly a century now without our knowledge whatsoever. That’s right, a second moon! However, this moon is in exactly the same size as the other one and in fact should be called an asteroid that just so happens to be wandering around with us as we fly through space. 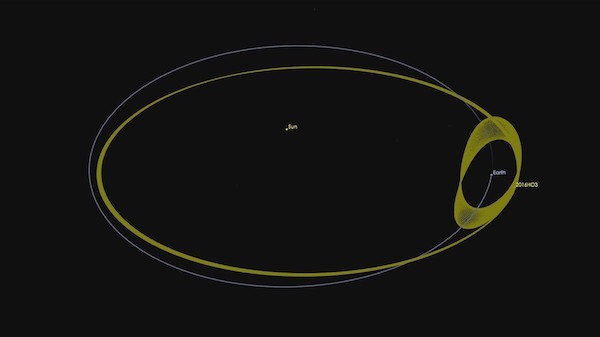 Luckily, this second “moon” was found by the Pan-STARRS1 asteroid survey telescope located in Haleakala, Hawaii. This asteroid has been extremely elusive due to its sporadic and unusual path of orbit around the earth. Tilted at 8°, the asteroid is considered to be highly elliptical which makes it able to travel within the ranges of 38 to 100 times the distance compared to our “first moon.”

This moon is also being referred to as asteroid 2016 Ho3, apparently it has been captured in our gravitational pull for just about a century and has been doing a wonderful job of evading our eye. In addition, the asteroid makes its way around the sun for 365.93 days, which is seemingly a tad longer than Earth’s 365.24. Spanning about 40 m across and is about 100 m wide, the asteroid’s orbit tends to be one of the more harder things to track. Because of its tilt as well as elliptical orbit, the asteroid may appear closer to the sun and can seem to be moving extremely fast compared to our planet. At other times the asteroid may be found farther away but moving slowly.

According to a researcher, the asteroid is expected to never get closer than about 14 million km away from Earth. They also claim that the asteroid will never stray off its course more than 40 million km. The asteroid is expected to be around for many more centuries before it decides it has bigger plans in the universe. What do you think about this crazy new phenomenon? Do you have any thoughts or concerns about this new discovery in the stars above? Share your comments on Facebook!