NASA’s eyes in the Martian sky came across some odd looking dashes and dots on the surface of the red planet recently, which they pointed out has an eerie similarity to Morse code. The image was taken on February 6, 2016, by the high resolution imaging science experiment (HiRISE) onboard the Mars Reconnaissance Orbiter (MRO), which has been exploring Mars since 2005. 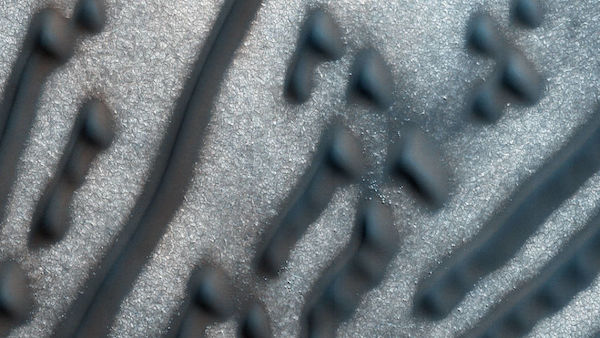 But don’t hold your breath if you think it’s Martians trying to send us earthlings a message, like a castaway spelling out “help” in giant rocks on a tropical island. These huge “dashes” are actually dunes that have been formed by winds blowing in two directions. The “dots,” called barchanoid dunes, are created when there is a brief blip in the bidirectional wins that form the linear dunes.

However, we still aren’t totally sure how these geological features are created. So this work from HiRISE is proving to be of great interest to geophysicists, providing them with some insights into wind direction and the processes that create these geological formations. Veronica Bray, a planetary scientist from the University of Arizona, the institution behind the HiRISE camera, told Gizmodo that she deciphered the “message” anyway for a bit of fun. According to Bray, it says: “NEE NED ZB DEIBEDH SIEFI EBEEE SSIEI ESEE SEEE.”

Who else wants to believe!?!