Their 6 Year Old Son Passed Away, But It Was What They Found After He Died That Broke My Heart.

A mother in Georgia says after she and her husband lost their 6 year old son, they came home to find that he had left them a special note. Leland Shoemake died Friday after a month-long battle with a rare brain infection. On Monday, his mother Amber posted an update to the Facebook page dedicated to his battle saying, “My whole life this has been my only fear and it came true. No one should ever have to bury a child. It still doesn’t seem real to me.”

And then she explained that when she and her husband came home from the hospital, they found this: a note Leland wrote them that reads, “Still with you. Thank you mom and dad.” 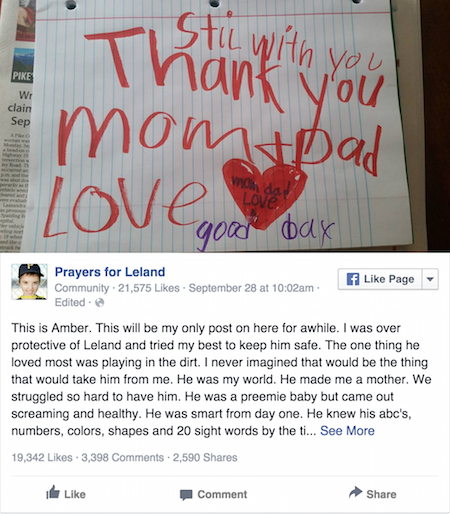 Amber explained, “We have no idea when he wrote it that you can tell he was always a special child.” Ember’s post has been shared 2,600 times on social media and thousands of strangers have reached out to share their condolences and support for the family.